﻿﻿There has been a lot going on this week. As buildings burn and police continue to be brutally abusive to citizens throughout the U.S., I want to take a moment to address the murder of George Floyd and the protests and riots of the last few days. I write as a white, educated, heterosexual man who recognizes his own privileges in the world. I am deeply saddened and angered by racism, abuse, hate, and social injustice. I stand in solidarity with the Black community and all who are seeking justice.

If you consider yourself a racist or just don’t care about this topic, there is no need to keep on reading. Let’s leave it at that. Unfriend me if you like or keep reading for a different perspective on the matter. When studying for my Master’s degree, I did a lot of reading on topics pertaining to race, power, privilege, inequality, diversity, and social justice. I also worked with inner-city kids and at-risk youth in Los Angeles and New York from 2004 to 2009.

Reading about these topics have helped me learn that our society has normalized racism and other forms of abuse for way too long, where unfortunately, the abuser has usually “gotten away with it.”  Our generation is saying “no more fucking abuse!” While the U.S. has a president that represents hate and all that is bad with the world, there is a conscious generation hungry for justice, peace, love, unity, and respect.

If you are having issues with the destruction of public property and vandalism, you are most likely not getting it. That is material and can be fixed. A taken life cannot be restored. In a fight for global attention and local justice on this racial issue, anything and everything may be necessary.

It has been said too many times: violence begets more violence. The violence we are seeing today is the by-product of centuries of white-on-black-violence, which is born out of white supremacy. These so-called violent protests we are seeing are nothing compared to the history of racial violence in America, and I bet most of this violence was unseen by many and written by no one.

“Big Floyd was known throughout his community as a peacemaker, a minister, and someone to take advice from. He was known in his new job as a hardworking and friendly employee. Everywhere he went he was the same caring and kind spirit (Justiceforbigfloyd.com).” Floyd’s murder represents everything that is wrong about race and privilege in the world. In Floyd’s final moments, his “I can’t breathe” statement was a plea for life and mercy. White officer Derek Chauvin continued to kneel on his neck for more than 7 minutes and offered him none. 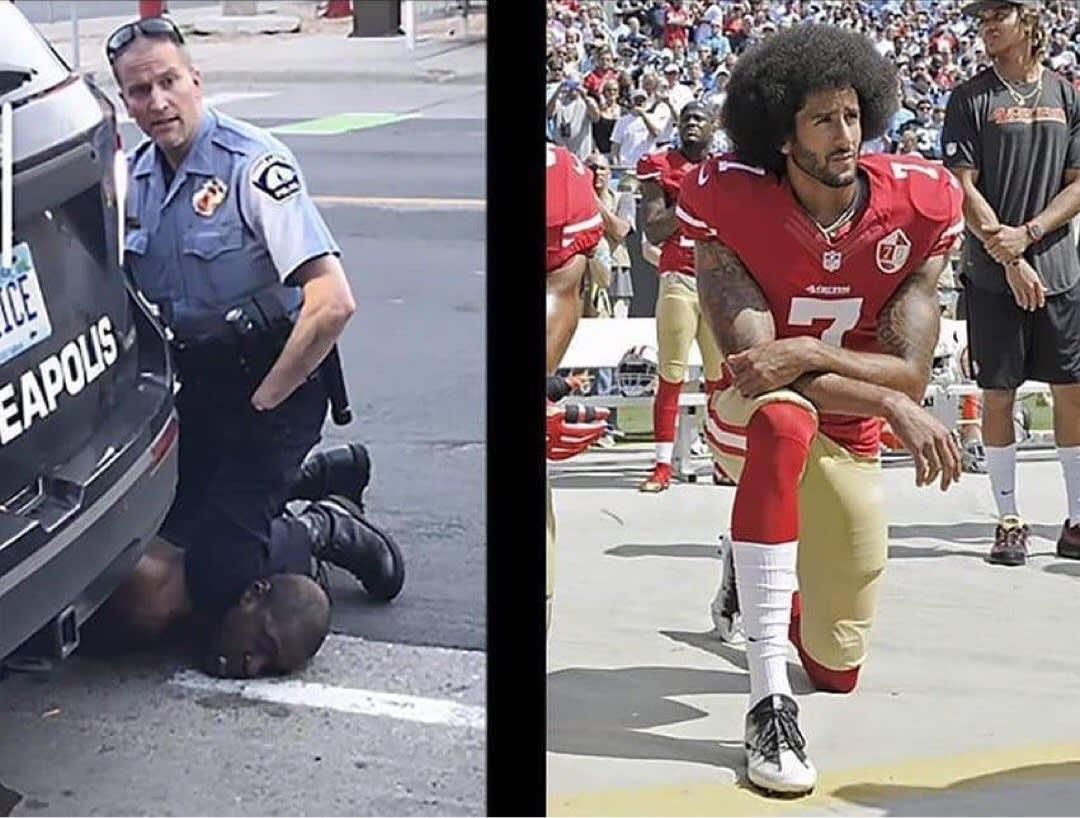 In the photo above: If you are indifferent by the 1st knee, but outraged by the 2nd, then you may have to ask yourself why. On the right is 49ers quarterback Colin Kaepernick, who in the 2017 said: “I am not going to stand up to show pride in a flag for a country that oppresses black people and people of color.” Colin was basically saying, how could you “own” and sing with pride an anthem that symbolizes freedom yet be indifferent for the freedom of a black man?

The United States of America was established as a white society. Thomas Jefferson was a slaveholder. As a racist profiting from slave labor, he did not really believe that all people were created equal. Political activist Jim Wallis describes in AMERICA’S ORIGINAL SIN: The Legacy of White Racism, that The U.S. was founded upon the genocide of one race and then the enslaving of another. White supremacy is woven in the fabric of American life and continues to be a problem today.

No race nor gender is superior to another. In God’s eyes, we are all one and the same. The series of events unfolding from coast to coast in America, challenge us to look inside and recognize if and how we have been part of the racial problem all along. We must be humble and open to listen actively and to recognize our own faults and privileges regarding our: skin color, gender, education, social status, etc. We must be willing to unlearn a lot of shit we have been fed growing up by whitewash racialized politics and curated media.

The U.S. government is full of shit. Leadership from all sides is absent.

We are at a tipping point. Communities across the US are standing up in protests. We want to change the course of history. Racism is a cultural disease at many social and political levels, an institutionalized system with centuries of oppression and many evil layers of self-protection to literally get away with murder. In the words of Angela Davis, “In a racist society, it is not enough to be non-racist, we must be anti-racist.”

Let’s be part of the solution. Be part of the revolution. Be part of the work ahead and the change that needs to happen once and for all in America and the world. Together, we can change the course of racial injustice, discrimination, and abuse in favor of a new system that protects, values, and honors all life-equally. This is not a call for empathy, but a call to become allies of justice along with our black brothers and sisters.